What is blue spirulina?

Looking for a way to add that electric blue color to your favorite smoothie, latte, nice cream, dessert, kombucha or frosting, but want to ditch that nasty food coloring? Look no further than blue spirulina powder.

What are the benefits of blue spirulina?

The antioxidant rich blue spirulina has a long list of benefits. Phycocyanin or blue spirulina is a strong free radical fighter and is known for its anti-inflammatory properties. In addition, blue spirulina can boost the immune system and reduce cataracts.

Blue spirulina packs a lot of punch with its vibrant color but has a neutral to slightly bitter taste. The slight bitter taste of blue spirulina can easily be masked by fruits or other ingredients it is added to. Check out this smoothie bowl recipe from Unicorn Superfoods to brighten up your morning. 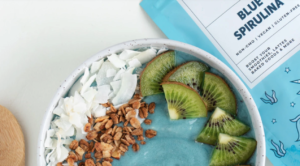 However, blue spirulina contains a more concentrated dose of antioxidants. In addition to this, green spirulina has more of an algae or fishy taste so it may be less versatile to use in recipes and less desirable to use to color foods.

Although blue spirulina may be lower overall in nutrients than green spirulina, it still has many of the health benefits as its green counterpart but with a neutral taste making it a great and versatile option to add to recipes.

Where to buy blue spirulina?

Interested in adding a scoop of this amazing superfood to your next recipe? Check out these blue spirulina powders from Vitacost and Unicorn Superfoods.

Blue spirulina is generally regarded as safe. However, when buying blue spirulina you do want to be aware of any fillers or extra ingredients that could be added. In addition, spirulina can contain heavy metals due to run off and pollution.

These kinds of contaminants can cause liver or kidney issues, to avoid this you will want to select a brand that grows their spirulina in a controlled environment.

Check out this article on Bamboo Shoots!

What are Cremini Mushrooms?

What is growth hormone?